5 days to discover the island of Teneriffa and the energy of the dolphins.
The course will be held in english language and is designed for a group of about 10 participants.

New : In an ancient chapel on a historical Pyramide there is the possibility for individual
HLT ® Treatments after the workshop (70 EURO)

The sense and the essential of the work with all kinds of essences is to release self healing processes over our emotions and through our thoughts. We have to learn to use them more consciously.

The spirit forms the matter. All physical processes vibrate on a certain energetic frequency. Among others illness can be considered as manifested (wrong-) information, that is perceived unconsciously and is expressed by means of the illness. This disharmonizing situations first show themselves in the invisible, the fine-matter bodies, before they make themselves visible in the physical body, with disharmony and illness.

The Kirlian-photography mentioned can return the invisible vibrations of an essence-drop to a visible energy field. This process can be compared with the micro-photography – where a certain colour- and energy structure is made visible, for ex. of vitamines. Through the light-colour-vibration transmission the transmission of energy over the light- and colourintaking eye as well as over the skin as intaking organ can take place.

For the execution of this procedure for the transmission of an essence to an organism a transparent container (essence bottle) filled with the essence is placed in the projecting ray of a light source as well a transparent Kirlian-photography of this essence between the bottle and the light source. The transparent bottle shall be placed in front of the lens, forming a cone of the diaprojector, in the diaprojector there is the Kirlian-photography. In the ray cone a projector screen can be prevued or a reflexion area in front of which the person stands.

The effect can even be increased by placing one or two mirrors in the angle of 45 degrees behind the person, in order to give ray to the body half that is turned away from the light source.

During the treatment tones or pieces of music as well as natural sounds can be played with a Record player. The tones can even strengthen the effect of the vibration transmission. 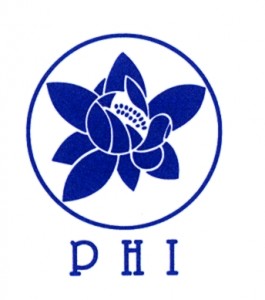